Valkee tells to the public that the earlight device heals Seasonal Affective Disorder (SAD), alleviates jet-lag and resets the internal clock, enhances cognitive performance, and betters motoric reaction. The SAD and circadian rythm claims have been defeated in placebo-controlled trials, as earlightswindle.com evidenced before. But what about the supposed positive effects on healthy people?

Valkee did clinical trials that remained unknown so far, because it’s not mandatory to officially register studies on healthy people beforehand. The company accomplished amongst others a preliminary trial, described as follows in an addendum to a patent application: 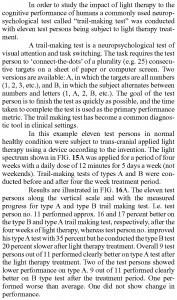 The enhancement in performance test time for 11 persons exposed to Valkee’s earlight was moderate and of some heterogenity.

Valkee undertook a controlled study similar to (or part of) the failed SAD study: Three groups á 30 persons with 3 different light intensities ~1, 4 and 9 lumen. Treatment was to be applied over 4 weeks for 12min/day on weekdays.

The result was the same as in the SAD trial: No difference between the groups.

Valkee had done some dose-finding tests before, identifying the 1 lumen intensity as placebo (same source). It is likely, that this 90 persons study was also designed and run as a placebo-controlled trial.

In any case, it showed that it is irrelevant what to put in one’s ears, as long as you put something there at all. Valkee knew from this point, that earlight itself has no effect on a healthy person’s performance – but also that a trial would seemingly show an effect, if the test would not be properly controlled.

The company did then such a test with healthy students, with the “control group” getting no treatment at all, not even sham treatment (in biomedical research a so-called waiting list control). The result was as foreseen, and subsequently used for marketing. 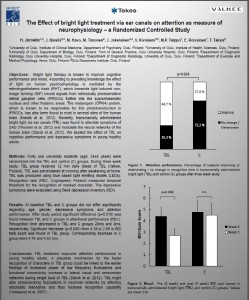 The former and methodically better study results were buried. That’s the way Valkee does research, signed with “University of Oulu”. Finnish tax payers’ money at work.

Update 4.1.2014: It may not have been a separate study, but conducted in connection with, or as a part of, the RCT in Seasonal Affective Disorder. This would mean Valkee calls persons with severe depression “generally healthy”, and silenced completely these outcomes when the RCT was registered. This would also mean that a placebo-controlled trial showed that the device does not better cognitive performance.