The first-ever peer-reviewed scientific article about Valkee was published some 3 weeks ago. It was the first placebo-controlled study on Valkee reaching the public, and it was done by independent, well-known researchers. Therefore, it’s not surprising that the result was negative. Valkee’s scam device is useless.

Valkee had time enough to answer to this piece threatening their scheme. Here is what their chairman Timo Ahopelto had to say:

As usual for Valkee’s leaders, Ahopelto does not give any proof for those claims. Just tell some random lies, who cares? On Facebook a more common-sense statement: 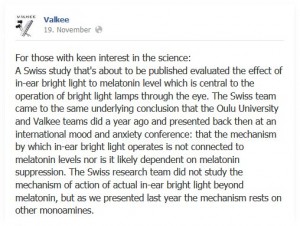 At this point, the swiss study was not “about to be published”, it was already published 6 days ago. But why not try to mislead those who cannot use PubMed? Valkee’s own earlight research never even came close to a scientific publication – i.e. it never passed independent peer-review.

All those snippets link to a blog entry by Melanie Rüger, PhD, in Valkee’s pop-science blog Shine. It’s reproduced here, because their statements are often volatile.

What Valkee is trying to tell on all channels: The Swiss had investigated something which is not related to the earlight’s function. The device does not influence Melatonin, because it’s not needed. All are looking on the Melatonin, but they’re all wrong. If they’d be experts, they’d know that Valkee had already told this – so nothing new here.

The reality, however, is somewhat different from Valkee’s tales.

Salivary melatonin is measured in such studies, because it is the direct marker of the internal clock’s state. That’s a basic thing with references ad libitum. Here, here, here, …

If something works on the internal clock, then it can be checked through salivary melatonin levels. Such studies are usually conducted at the evening or at night, to allow for best signal detection. The melatonin secretion rises in the evening, peaks around 03.00 – 04.00, then falls. It is very low during the day, making it difficult to find changes then. Light suppresses this melatonin level rise, and bright light applied in the evening makes alert. This was shown in the study for the active control condition, standard ocular bright light over 12 minutes. It clearly reduced sleepiness, although normal therapeutic exposition would be 30min or longer.

Valkee’s earlight performed on melatonin secretion like the sham condition, an ear lamp with no light output, it had zero effect. In other words: Valkee’s device does nothing on the internal clock. That’s why the swiss researchers’ conclusion is fully correct: 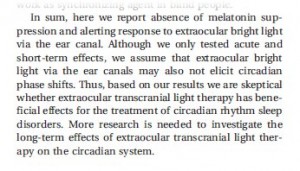 Politely they add that longer-term effects were not studied. But how could chronic use have any effect, if there’s not even a short-term reaction to the light?

Even if the company would be right with some of their marketing-driven speculations about alternative pathways – the output of the internal clock still says it is not affected by earlight. All embellished talk about feel-good monoamines is pointless, it misses the central question. A smoke screen.

But also the alternative path for promoting alertness is not for Valkee: 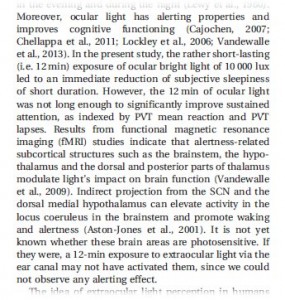 This result smashes in any case Valkee’s marketing speech of a “portable substitute for sunlight”. Light through the ears definitely has not the beneficial effects of real sunlight on the brain. Their earlight device has nothing to do with true bright light therapy, which works on the internal clock. Valkee’s use of bright light studies for marketing is absolutely inappropriate, at the very least.

Valkee has every reason to silence the public discussion about these facts. 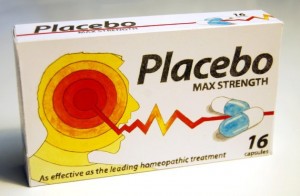 The company tells further it had foreseen these results already in a 2012 IFMAD congress presentation. They link to a PDF (page 18) with poster titles and author names, but no information on what the research (?) allegedly showed and how it was done. Not only that there’s no scientific publication. Not even the abstract can be found through database searches, and the content is inaccessible. It is virtually non-existing, in terms of science. To compare such a fictive thing to a real journal article is bad misinformation.

Furthermore, the effect of bright light therapy on Seasonal Affective Disorder (SAD) is thought to be related to the internal clock. The swiss results are excellently in line with the findings from clinical trials demonstrating that earlight works, at best, like a placebo in SAD.

Earlight lacks an alerting effect which was demonstrated for bright light, and the study showed that it also has no effect on motoric reaction and attention. The short ocular exposure in the control group did have neither. It is not marketed as improving sport performance in healthy people.

To make it short: Valkee is useless. And that is proven by clinical trials.

There is no reason, whatever, to suspect that it could work.
Are there any doubts, what Ms Rüger is being paid for by Valkee?

Update 28.12.2013: Valkee is reading this blog carefully. They’ve put now online the poster which allegedly told that Valkee’s earlight is working through some alternative pathway, not melatonin.

Instead, the poster says only, that earlight does not suppress melatonin (=does not influence the internal clock). Valkee had known for at least a year, that their marketing claims about effects on circadian rhythms are baseless.

Valkee is telling us, that “Light elicits its effects through different mechanisms than melatonin alone” without knowing a single bit what these mechanisms are. Because it does not work, it works! Because it has to work! We are telling you that it does!!

It is absolutely clear to me, why they hid this poster from the public. Incredible./-ed.

UPDATE 18.7.2014:
Noted that the article PDF is better linked here than in the previous post.

Full-text PDF of the Bromundt study.

4 thoughts on “Valkee resorts to lies, gives up on science upon Swiss study”