When Valkee was on the verge of bancruptcy in spring 2011, left with a negative placebo-controlled trial and no money, they needed positive results fast. They came up with an extremely simple and fast-to-breed histochemic thing, some protein found in all brain regions they chose.

The low-impact test was for Valkee’s PR machine an international scientific breakthrough. The poor encephalopsin was named “OPN3” and mutated to be “known as the photoreceptor protein”.

Oulu’s local paper Kaleva was one of the first targets. A patriotic article about the “breakthrough” appeared soon.

From there, it spread widely and reached even the respected YLE TV news. Now, it was no longer a protein with unknown function, it was the human brain being photoreceptive. 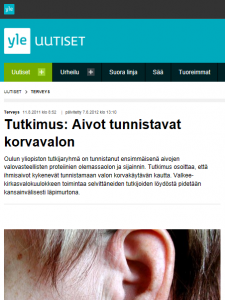 And, miraculously the earlight was overnight working as claimed – in the press.

Valkee’s then-new CEO Timo Ahopelto said straight, that Valkee had just made the human brain photosensitive. They really did.

Now it’s the third year since this very finnish scientific breakthrough, and still no journal has showed mercy and found some pages for the poor study. The only echo has been in the Journal of the Finnish Medical Association, mocking about the idea that a protein could mean something for the treatment’s efficacy.

Still waiting. It must be the conspiracy of journal editors and industry, which Valkee’s Juuso Nissilä was speaking of, that hinders publication of these grandiotic findings.

You have to remember, that those colleagues who accept new research articles into the journals, they have their own paradigms and also connections to the industry.

What would this society be without this kind of journalism?