From September 2010, the english pages of valkee.com, as well as a number of reseller sites, fanfared revolutionary results. 9 of 10 patients were cured from severe depression with a 4-week earlight treatment. 25 individuals participated in the trial. 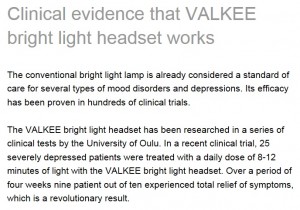 In 2012, things have changed: It’s still 9 of 10, but the trial had 13 patients. What happened to the rest – that’s more than a scholarly question. If you can modify this number just like that, then the result is not reliable.

The thesis of A. Abou-Elseoud, about a set of fMRI trials, says:

A number of patients was recruited into the pilot study in winter 2008/2009. This is obviously the same trial which was later published in Medical Hypotheses. The dates fit exactly, also the descriptions of the screening procedures and the entry criteria.

Abou-Elseoud tells more in an article about the fMRI findings, out of the thesis.

There are slight, but clear differences between the wave I (pilot study) patients and the details in Valkee’s publication. Age, HAMD score, number of depressive episodes, all different. But it is the same patient set, with other characteristics identical.

The same study has variable numerical values, and most important, a volatile number of participants.

The claim that earlight somehow cured 9 of 10 patients in a trial is absolutely not credible, because even this low-class evidence for Valkee’s effects seems to be fabricated.