After Valkee’s public bust in 2012, humiliated with the flim-flam award just before christmas, the company was under immense pressure to come forward with placebo-controlled research. That winter saw a negative sham-controlled study, testing effects on blood pressure and heart rate. It failed and was buried. According to Valkee, a placebo-controlled anxiety study was ongoing, but unknown to the public.

In Seasonal Affective Disorder, there had been an inconclusive pilot trial, a halted one, and a negative placebo-controlled study. I.e. in the main indication, there was only proof that the device does not work. Valkee kept on selling the earlight, while it had been scientifically demonstrated to be ineffective. So another trial was set up, the third placebo-controlled study in SAD. As with its predecessors, the results would never see the light of the day. 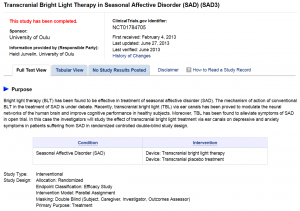 The power was as low as in the previous two SAD placebo trials: 30 persons per treatment group. 60 participants were recruited to receive earlight or “placebo treatment” at home.

It is fully unclear how the placebo could have been given unidentified. If there was dim “placebo light” – then the setting would have been a copy of their previous failure, where placebo light scored better than earlight. Or, if there was no light, then it would be an obvious fraud as it was in the Oulun kärpät ice hockey study.

Therefore, the study quality seems not better than in the failed trials. No additional statistical power, no advanced methods. Why would someone waste time and money to conduct such a trial? Just to show “we are doing research”? Or to fake results planfully?

The results of the blood pressure trial were at best neutral and shown to maybe a few congress visitors. The results of this SAD trial were buried completely. There is no way to guess what the outcome was, as long as the data is hidden from the public. It’s not a good sign when the very existence of a study is silenced.

Until proven otherwise, there are now 3 unsuccessful placebo-controlled earlight studies in Seasonal Affective Disorder: The first, with 60 participants – halted. The second – failed. The third, again with 60 persons – buried. And sales go on.