Valkee Ltd is having a hard time. They are producing a stream of apologetic “corrections” – to the press, critics and scientists, and now they take on earlightswindle.com. I got the doubtful honor of being addressed in Valkee’s longest blog post so far. The company’s rant comes at the time of disastrous #valkeeleaks publications on this site, after I announced the most important leak to come.

Valkee was asked for many months, to name bugs on this site. Where am I lying? What are false accusations? What is made up? – Until now, the company did not answer. Not surprising, since the files and statements documented here are made by Valkee and/or independent organisations. Here are no accusations.

Valkee’s CEO Pekka Somerto does not challenge the crucial facts, i.e. that so many unpublished negative results exists, and that claimed findings were forged. But he says here are wrong points. I comment on what I could identify, though Somerto was not able to cite properly.

The finnish trade register tells clearly, that from 2009-2011, Timo Takala was on Valkee’s board. He is listed in publications from that time up to these days, and still serving as a principal investigator for the company. 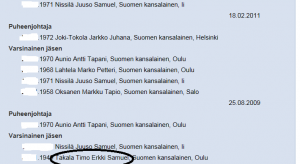 A blatant lie by Valkee’s CEO. But why? Is Valkee so desperate that nothing matters anymore? Did they want me to waste €6,20 for trade register database access? – I think, Valkee’s financiers and followers are reading this blog, too. Somerto tries to keep them confident. Facts are not important.

But earlightswindle.com is reporting facts, not “allegations”.

NOTE: When people asked Somerto publicly, why he is lying, their questions got deleted, and the text on Valkee’s blog changed mysteriously. See here.

Approval as a Medical Device

I never said or implicated anything like this, because this would be a stupid thing to do. It is very easy for manufacturers to gain approval, they do not have to falsify studies for this. Somerto made this openly dishonest accusation already in September 2013. He had, and has, no proof for this. That’s the advantage for someone refusing to cite.

On the other hand, the fact that Valkee falsified results is properly documented and proven beyond any doubt. Not just by me, others came to the same conclusion.

A study from Switzerland

Not true. I had reiterated the basic statement, that the device is useless, as I do on many occasions. The post explains clearly, that the evidence as a whole is telling so – and that there is not a single piece pointing to an effect. The earlightswindle.com main page holds the same distinguished statement. It is a logical conclusion, that because the swiss study showed that Valkee’s device does not influence the internal clock, it is probably ineffective for the claimed indications. However, the independent study did not, and could not, demonstrate this directly.

I am definitely not descending to Valkee’s level: The company claims that a protein in the brain means that the organ is photosensitive. It’s always dangerous to use only own standards when judging other people’s work.

The text cites guidelines to show that there are officially recognized standards for efficacy in depression. The source is unmistakably labeled, it contains the word “medicine” twice in one line.

It’s worth acknowledging that Somerto points to the harsh difference between devices and medicines regulation: The latter is strict, demanding placebo-controlled trials. The fluffy rules for medical devices do not include such a mandatory efficacy test.

There are journals that claim to be peer-reviewed while they are not, or the review is fully incompatible to what a reader expects when the term is used. Valkee’s earlight studies are published in such journals. To claim that an article has passed peer-review, without pointing to the exceptional circumstances, is what I call a fake peer-review. Valkee’s CEO seriously claims that the label peer-review cannot be misused because peer-review stands for good quality. Is a cigarette healthy, if the manufacturer claims so on the pack?

Every researcher aims to publish in the most prestigious journals and is perfectly aware to what kind of journal he submits his work. This is not a misunderstanding. Pekka Somerto tries to defend improper actions by obstructing the view. Valkee’s only earlight article in a, somehow, medical journal was submitted through an online system which states on its entry screen:

I’ll leave it at that. A waste of time and effort. One thing is still worth noting:

Homeopathy has millions of users though it’s a placebo phenomenon. Valkee is selling through the same channels for “alternative treatments”.

Every humbug will sell when it is marketed to an audience big enough to include susceptible individuals. Valkee’s scam was presented carelessly by the media to tens of millions of potential consumers. It is nice to see that the often denounced masses are not so dumb as Valkee wants us to believe.

It is very reassuring to see, that Valkee Ltd. cannot find false information on this site. The company’s CEO has to lie, to make things up, or he is deliberately misinterpreting simple statements. The crucial points go unchallenged, i.e. that many negative studies remain unpublished, and claimed findings were forged.

Somerto has succeeded in delaying the next of #valkeeleaks by some days. Probably this rant is meant to answer upcoming painful questions: “We’ve already commented on earlightswindle.com and there is nothing more to say.” However, Valkee will have to comment on the facts.

6 thoughts on “No false information on this website, Valkee reassures”