Even in Finland, the SAD season is too short for Valkee Ltd to survive the summer months. Thus, the company seeks to ensure revenue by promoting the scam device for jet-lag, sports performance, and many other things .

In winter 2013/14 they started a campaign with Jarkko Nieminen, a finnish tennis pro. Sponsored by Valkee, he tells in childish, poorly ghost-written words to perform better with the earlight (although he actually only loses ATP ranks since he’s “using” it).

The company shows around a 2011 study with Oulu’s Kärpät hockey team. In May 2014 Valkee fanfared that it’d been published in a peer-reviewed journal. Since such claims were always false so far, it would be an enormous achievement if true.

The following information is from Valkee’s article, and from the TV testimony of the study’s main author, Mikko Tulppo, if not stated otherwise.

Valkee bought the study from the rehab and research firm Verve in Oulu for 10.000 Euros. A remarkably low price for the tremendous marketing effect coming with Finland’s serial champions (they just took also the 2014 championship). Tulppo and Valkee’s CSO Nissilä worked together before, which may explain the discount.

How was the study done?

The study took place in October 2011 (Tulppo said November). There were 10 matches in 24 days. Twenty-two players did participate. Eleven got an earlight device. The other 11 got a defective earlamp which produced no light at all – the so-called placebo group. All were instructed to keep the earplugs, lighted or not, in the ears at home every morning for 12 minutes. They should keep a diary for observations possibly related to the study. 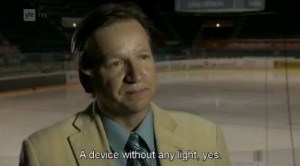 Before and after the 3 weeks treatment, at least these 8 outcomes were recorded:

What were the results?

Initially, all outcomes were negative – No significant changes (sleep data not shown):

The authors then used a data torturing technique to make at least one outcome positive: Adjusting for age brought a difference for the motor time to visual signal measure in the earlight group, marked † in the table. The reaction time was unchanged, also the most important stimulus → action outcome.

Dredging with the Bonferroni test brought post-hoc (!) a success within the earlight group for the motor time component. Despite the variety of statistical tools available, the other 7 of the 8 outcomes stayed negative.

Side effects are not mentioned, but at least one player from the sham group had to stop after three days. He got no earlight – but severe sleep problems from the strong nocebo. Although not all 22 players completed the trial, handling of such dropouts was not described. However, it dictates the results.

Where are the bugs?

Even the authors state that the study was probably not double-blind – it cannot be, if one gets a lightless lamp home in a light treatment trial. The correct conclusion: Even with open treatment, the device’s placebo effect did not produce significant changes.

The paper, full of orthographic mistakes, holds another nonsense claim:

The trial was conducted in October, shortly after the autumn equinox, which is the same even in Oulu. Day length in mid-October is nearly 10 hours there, just one hour less than in London. The darkest time of the year has only 3,5 hrs day light in Oulu (Dec 22). Whoever reviewed this paper was apparently not familiar with the european calendar.

By far the most significant problem, however, is that the players’ true strain was ignored. The paper tells

Why wasn’t corrected for time on ice? It’s readily available, and stands probably also for other confounders. An injured player would not play. He trains differently. A player who is perfectly fit at the beginning may be tired after 10 matches. Databases indicate sharp differences during the trial (jatkoaika.com): 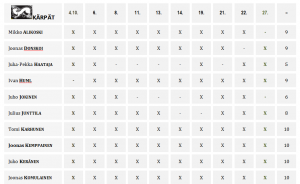 Thus, the results are completely meaningless. With such a low quality, the study would not be accepted for a peer-reviewed journal.

How was the paper published?

Announced by Valkee’s frontend Timo Ahopelto for April 2012, the article appeared 2 years later. Ahopelto told repeatedly that it is under review somewhere. Received for his final resting place in February 2014, it must have been submitted to at least 4 other journals before. Possibly there were more fruitless submissions.

Frontiers in Physiology is one of dozens similar journals by the swiss company Frontiers Media SA, known for dubious practices – just what to expect from any predatory publisher. Started recently, it’s available electronically only. The Nature Publishing Group owns the company, and thus participates in the boom of more or less suspicious open access publications. The business model “pay-for-publication” without editorial interference reached the big players.

The journal is not indexed for MedLine, which accepts only quality journals. The surprising twist: It slipped into the PubMedCentral repository of free articles, and because PubMedCentral is raked regularly by PubMed with the eCollection stamp, it got a PubMed citation. “MedLine“ and “PubMed” are nowadays synonyms, blurring the borders between the worlds, and between real and fake peer-review.

Frontiers in Physiology has no real peer-review. The journal’s website says, that it is very unlikely to get an article rejected, and so the Valkee paper got accepted: The associate editor for the Exercise Physiology part assigned it to one of his subordinates at his workplace, the “Department of Applied Physiology and Kinesiology” of the University of Florida.

This assignee is an experienced dance instructor from Korea, which explains her unawareness of the European calendar (see above). Seemingly not confronted before with clinical trials and (other than descriptive) statistics, she could do nothing else and returned the paper to her boss. He okayed it.

Peer-review usually means that two or more independent reviewers from the same field look at the paper. They shall certainly not be dependent from the editor.

While Frontiers is praising their “efficient” process, it would not surprise if more suspect publishers sprang on board. Valkee has shown again, that they are able to cheat beyond the last frontier of academic credibility. As the company is armed with time and money, we have hardly seen the last junk study from the earlight scam.

3 thoughts on “Study: Valkee’s earlight does not improve athletes’ performance”