Valkee Ltd now began the third launch of their product – the second relaunch of the LED headset – with its new target North America. But: How could the mighty U.S. Food and Drug Administration (FDA) allow such a scam device onto the market?

It turns out, they didn’t. The FDA had refused the Valkee “HumanCharger” import into the U.S.A. earlier this year. For a number of reasons, mainly misbranding.

UPDATE 7/2017:
The FDA changed its code, the document can be found clicking the link above and then
Feb > 2015 > Country: Finland. [screenshot] 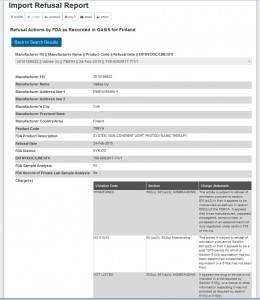 There are several ways to get “approved” by the FDA, depending on the classification. Valkee’s HumanCharger got no 510(k) clearance, and certainly not a Premarket Approval (PMA), for which one must present sufficient clinical trial data.

It is not listed as approved with the FDA (the listings here) in any possible way. [- If any reader has additional information, please let us know. -]

That, however, does not mean it is sold illegally. Many light therapy devices, for example such for cosmetic uses, are exempt from FDA regulation. Then they can’t make relevant medical claims. That’s exactly what Valkee Ltd demonstrates: The device is sold as a lifestyle – weight loss aid – sleep promoter – energy booster. Just typical scam claims. It may work on tech people who are prone to fall for such innovations.

Valkee does not need any research staff for this strategy, the marketing trial being published. So the company fired its Research Manager Heidi Jurvelin, the Research and Science Liaison Manager Melanie Rueger PhD, sales people, and replaced the CEO Pekka Somerto with Aki Backman. (Jurvelin and others now appear at Valkee’s sister project JouZen Oy  aka OURA, fulfilling predictions by the social media influencer Vesa Linja-aho: Valkee scales down to a sales bureau, and JouZen takes over.)

The new course is set. Personally, I would miss this absurd tale when it came to an abrupt end, now as they finally seem to stop scamming of sick people and look for the too-healthy jet-set clients. However, it does not look good for Valkee Ltd. There are many wonder treatments for jet lag already.

Valkee Ltd seems to have completely abandoned its SAD claims, now the device is called “HumanCharger” and works – clinically tested! – on jet lag. Marketing bubbles re-used: They only changed some words in their PR stuff, the rest is the same as for SAD. The same unproven claims.

… and for Seasonal Affective Disorder!

Needless to say, these things were never tested. Valkee logic: Because it is approved for SAD, and those are SAD symptoms, it works on these. Therefore, it does the same for jet lag users!

The whole jet lag campaign is based on a study, which appeared already on April 1st in the journal Aerospace Medicine and Human Performance. Valkee says that this proves a jet lag effect. Its SAD studies are all on the Valkee website, this one remained behind the paywall. Typical Valkee users and marketing folks don’t need the facts and are better off without it. To pay 30 Dollars for a Valkee paper? Simply believe!

Update 12.6.17:40: The study is now available from HumanCharger, direct download from the site. It is not linked yet from any of their sites, and not found neither by google nor google scholar. It was added in the meantime to a press release. The leak for this post was several weaks ago.

I do not have the spare time to comment, but the main outcome is, that the device did not work on practically all things measured. No significant difference at the end of the predefined treatment period for 10 of at least eleven tested scores. Only one subscale of the POMS brought a significance, and this can be explained with multiple testing.

The funny point: It was the fatigue subscale. Exactly the same single result, as the homeopathic “remedy” No-Jet-Lag got in its own company trial.

recover “twice as fast” with homeopathy!

The difference: The homeopathic treatment is to be taken orally, during the flight. The Valkee device must be used for 6 (six!) days after the flight, 4 (four!) times a day to get to the same result. 24 treatment sessions.

Valkee is nearly as good as the leading homeopathic treatment.

Addition: The analysis was done on 52 patients, but the article speaks of 55 (Figure 3). What happened to the rest? Drop-outs happened, but are not reported. The whole statistics are invalidated. Incredible that this got through peer review.