Old news: The earlight maker Valkee Ltd, with its reputation as the most questionable company in Finland, tried to get me persecuted for this blog. With little success – besides that my postings about Valkee’s stalking had >>100.000 visitors so far.

The company accused me of aggravated defamation, for which the finnish penal code [PDF] promises a fine, with a maximum punishment of 2 years imprisonment.

On the evening of December 5, 2016, only hours before the celebrations of Finland’s 99-year independence started, the police in Kuopio got several “911” (i.e. 112) calls from a McDonalds restaurant at the central market (tori).

A man had pulled a loaded 9mm gun in the overcrowded burger restaurant, and waved it around to the horror of bystanders. Police units, which usually hang around there, rushed in immediately, and within minutes got the guy arrested some 150 metres away. He had decided to leave without firing a single round. Witnesses described the scene as very, very disturbing – not surprisingly, as the recent news of mass shootings and terror in Europe are present in everybody’s mind. 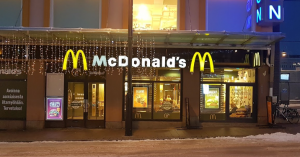 The restaurant in question.

Just two days earlier, a shooter had killed three women in front of a restaurant in Imatra, some 230 kilometres away [details here].

The offender in Kuopio turned out to be a 50-year old man from Kainuu, a remote region which has traditionally one of the highest per capita rate of murder and manslaughter in the country. He did not want to explain his actions.

The man did not cooperate – who would do that in his situation -, and so the case is handled now as a firearm offence (ampuma-aserikos). The penal code holds for that a fine, with a maximum punishment of 2 years imprisonment.

This is the same police department, and the same prosecutor’s office that erraticly handled Valkee’s case against me, and needed a year to confirm that I’m not guilty of anything.