Last autumn I came across a deceptive piece praising Valkee and its HumanCharger at goodnewsfinland.com (part of Finpro, a state-run agency). I complained to the editors about the fake news they spread, prompting them to delete most of the misinformation from the text. It took several weeks, and there is no mention of the changes in the article.

The diff is documented here, as a perfect example of how Valkee deceives others, which in turn deceive people about the HumanCharger. 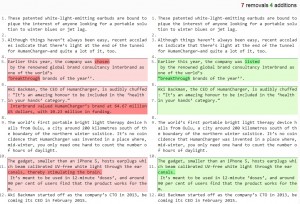 The Interbrand report of 2017’s “breakthrough brands” was a marketing stunt for the HumanCharger. In the small print, the report admits that companies could submit themselves and their stories were not challenged (p. 61 in the PDF). An embarrassing glitch for Interbrand: They faithfully listed what Valkee said, although the company should not be even in there. The limit for inclusion was 10 years in business and the HumanCharger company was already older than 10 years – it was founded in February 2007, and the product is even older.

Then it gets absurd: Interbrand has never “valued HumanCharger’s brand at 64,67 million”. Impossible – it’s a known scam, and as such, a toxic brand in Finland and most of Europe. The 65 million was, back in 2013, the valuation, i.e. investors paid ~10 million for a 16% stake, which put the whole company in theory at 65 million.

This is fairly outdated. Valkee lost its share capital and is now worth Zero.

That the earlight does not work by “stimulating the brain” is clear, at least to everybody who had ever to do with neuroscience. Silently deleted.

The name of the notified body or its claimed image doesn’t tell anything about the earlight. It just looks better, when it’s in Germany. Changed.

Valkee’s CEO Aki Backman then claimed that the FDA somehow testified that HumanCharger is harmless. That’s a breathtaking misrepresentation. In reality, they could not provide evidence for the device’s health claims. Therefore it got no approval as a medical device, but fell in the underclass “General wellness” category. As such, the device cannot give any kind of (light) therapy despite misleading advertisements. Deleted.

“Breakthrough brand” is a struggling micro-business

The aging scam company meets the tight finnish criteria for a micro-business and is therefore exempt from certain standards in financial reporting. The firm uses this in its balances and managed to survive to this day – being technically bancrupt – as detailed in its 2/2017 balance. A mysterious person has recently pumped millions of private funds into Valkee, to keep it alive.

Earlightswindle.com makes the balances traditionally available to the public. Here it is.