A BEMER rep from the US has answered to my investigative piece about the mysterious “Institute for Microcirculation”. Leaving a VIP.bemergroup link, she used 3 popular deception techniques: The straw man attack, a conspiracy theory, and fogging (aka Chewbacca defense).

If not self-evident, read my comments below. Markers added. There’s also some historic background related to East Germany which may be totally unknown to american readers, at least.

I never looked for a non-existing “BEMER institute”. My text stated clearly that I searched for the “Institute for Microcirculation”, which BEMER Group links with high visibility directly from its homepage (falsely listed as “University”/removed 7/2019): 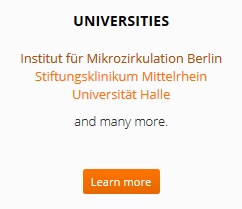 “BEMER” is the name of the method. It’s the same as calling an institute known for yoga yoga institute or an institute that developed SEMTEX the Semtex institute. Note the quotation marks. This is an classic example of a straw man fallacy: Constructing a fault which isn’t there to “disprove” it.

I found it always fascinating, how proponents of “Alternative medicine” are refusing to acknowledge obvious facts, and rather create or maintain conspiracy theories. An impressive example can be seen above: The flimsy website of the fake institute is too shameful for the glorious BEMER group propaganda, so it must be owned by some sinister force.

The WHOIS service is now heavily redacted – thanks to GDPR-, but the rest of the entry for Klopp’s “institute” still shows his name. 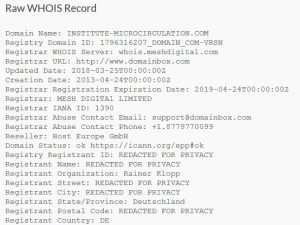 Searching for the “institute” on Google meanwhile brings up Klopp’s apartment as its location – just as I found out on the spot. 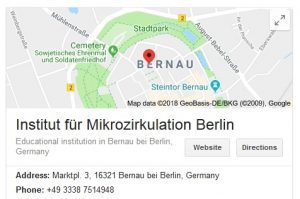 The rest of the comment contains mainly irrelevant listing of great but unrelated things, names, money, institutions and titles, meant to distract from the bizarre reality.

The whole comment is of a quality that demands a reframing. The following may not be easy to understand for westeners or the younger generation. However, things were as they were.

In the 1990s, I studied medicine at the Charité/Humboldt University in Berlin. I’m from East Germany, just like Dr. Klopp. We lived in the so-called German Democratic Republic (GDR) for longer than we did in unified Germany (in my case, because I’m in self-imposed exile since the 2000s). In 1992/93 I worked less than 200 metres away from were the “Institute for Microcirculation” claims to have been. My father is from the very same area in the North-East of Berlin, and I know places, people and conditions since my childhood. Hence my motivation to check this out – I found it interesting and knew it’s feasible.

In the GDR, high positions in university departments were not for the outstanding scientists. Professors’ posts were for the politically extremely reliable, hardened communist party members. Even a staff physicist as Angela Merkel had to deliver in marxist-leninist theory to gain a postdoc position. Often department leaders had close ties to the Ministry for State Security (>>Stasi) and typically were party members.

When it all fell apart in 1989-1991, as the communist regimes collapsed, professors and deans found themselves on catapult seats. Plenty got fired for “Staatsnähe” or Stasi contacts. The most prominent case in Berlin was the rector of the Humboldt University, Heinrich Fink, for being a long-time Stasi agent. Leading MDs had boosted their career with misconduct, even with criminal activities. (Suggested reading: >>”Es geht um unsere Ehre”, Der Spiegel 35/1991.)

The Institute for Cardiovascular Diagnostics at the Charité, where Klopp claims to have had a senior position (Oberarzt) as well at the then-Institute for Microcirculation were interlinked with the Zentralinstitut fuer Herz-Kreislauf-Forschung (ZIHK) in Berlin-Buch. The latter was known for strong party- and Stasi-connections. The ZIHK was famous, amongst other things, for employing the son of Stasi minister Erich Mielke, Major Frank Mielke, as a “scientist”. Klopp’s “Publications” page has numerous ZIHK monographs, indicating intense cooperation. The ZIHK was located, as it happens, at the Campus Berlin-Buch, Robert-Rössle-Str.10 – just the adress were Klopp’s “institute” now evaporated.

In 1991/1992 those leading doctors who were fired – or expected to be fired soon – often founded own companies or “institutes”. This is the background of the “Institute for Microcirculation”, which had no future at the Humboldt university. Nothing could differ more from the US picture with Stanford, millions of dollars, and scientific merits.

The scientific community in Germany, as well as now in Finland, merely has a humoristic approach to Klopp’s “research”, if any. BEMER International attempts to change this by spending big money for congresses and marketing stunts. It’s natural that some fall for it.

A well-conducted placebo-controlled trial in Finland has demonstrated, that the controversial BEMER therapy is useless in Fibromyalgia, finnish media has just reported.[>>1] The trial results have just been published in the respected Bioelectromagnetics journal ahead of print.[>>2] 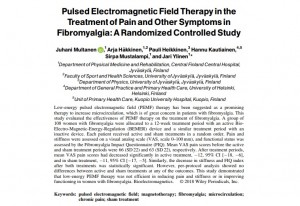 In the study, 108 patients with fibromyalgia diagnosis according to American College of Rheumatology’s (ACR) criteria were randomized to active (N=57) and sham treatment (N=51). They used the BEMER devices as advised in manufacturer instructions for 12 weeks. Then the groups crossed over, meaning that every participant had active and sham treatment at some time.

There was exactly no difference between sham and real BEMER treatment at the end of these periods. The study was adequately powered to find even small differences between sham and active application. Thus, it strongly refutes earlier results from the much smaller trials, which seemed to hint at an effect.

Furthermore, the authors comprehensively explain why there is no effect: The magnetic field is far too weak to affect human physiology or microcirculation. Therefore, it’s unlikely that this kind of “therapy” will have anything else than a placebo effect also in other uses.

Because it is an important study, and it was financed by public funds from finnish tax payers like me, I make the full text article available here. Objections be directed at earlightswindle@gmail.com.

See also:
My fruitless search for the “Institute for Microcirculation”, where the BEMER method was developed.