In the last weeks, there has been considerable interest in my blog post from May 2016, where I wrote about strange investments by LifeLine Ventures, managed by controversial investor Timo Ahopelto.

Of these, Valkee is the most notorious here in Finland. Its product, the earlight device which is now called HumanCharger, has become a popular synonym for “scam”. Valkee is technically bankrupt since 2017, has lost it’s last international investors, and was just a few days ago again noted in the press for being listed in the public register of insolvent debtors. Led by Ahopelto for more than 10 years, it is expected to leave the stage soon, but not before adding another 200 indiegogo crowdfunders to the number of 100.000 defrauded customers, who wasted around €200 each for a quack treatment.

uBiome, another declared favorite of Ahopelto and LifeLineVentures’ flagship investment, made devastating headlines in the US. After the FBI raided their headquarters, it turned out the founders – which Ahopelto held in especially high regard – had lied about nearly anything; one even about her age. uBiome filed for bankruptcy shortly thereafter, and their assets were auctioned – netting in about 1% from their earlier valuation of $600M.

The story of the third company I listed back then, Ductor Oy, is at least as bizarre as these earlier cases. However, it went mainly unnoticed so far. I try to line out its history, business and financing practices in the first part, followed later by another piece about their “revolutionary product”. Opinions, threats and the usual insults shall be put in the comments section or directed at earlightswindle@gmail.com.

>corrections after publication marked & at the end of the text<

May I have your full attention now, it is absolutely worth it. All details below, as unbelievable they might feel, are taken from the company’s own material and statements of the people involved. All is linked directly to sources. If there’s any speculation from my side, it’s noted in the text. Here we go.

Ductor was founded in 2009 on orders from God. This can be directly inferred from the circumstances described on the Facebook page of Veikko Latvala. Ductor’s co-founder calls himself a “healer and seer”, who can cure “migraine, back pain and cancers”. 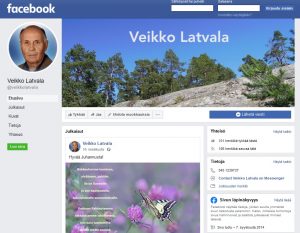 2008 and 2009 saw the publication of two books dictated by God into Veikko’s pen. God dictated even the colour of the book cover, according to Latvala. (The full translation is available here as PDF.) In the end, Ductor’s co-founder even hints he might be a reincarnation of Jesus, because a “Holy Man” is sent to earth every 2000 years.

While God was still dictating the second book (to becompleted in spring 2009), the farmer Latvala founded Ductor together with Ari Ketola. Ketola has changed his name to Ari Mokko in 2020. The company entered the finnish trade register in February 2009 (no. 2009/613158).

Latvala was Ductor’s chairman from 2009 until 2012, when he handed the position over to the CEO Ari Ketola, a faithful follower of the prophet. Latvala then assumed the role of Ductor’s director until June 2019. Ductor’s investor material from 2017 (PDF) says, that Latvala was responsible for R&D and product strategy.

According to archived versions of Ductor’s website, Veikko Latvala is an “inventor” and “the original founder of the Ductor idea”. He resigned from the board last year (Latvala turns 80 in 2020) but remains the second-largest shareholder. 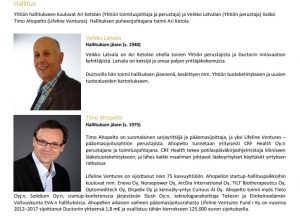 The third director has been Timo Ahopelto since 2012, the year LifeLine Ventures started to invest in Ductor. Neither Ketola, Latvala nor Ahopelto have an appropriate scientific or somehow professional background. Latvala was a farmer, Ahopelto helds a Master in industrial management, and the CEO Ketola has only had vocational training as a “merkonomi“, the finnish basic requirement for salesmen. The finnish press picked up these strange directors’ background once in 2016.

The company was probably financed during its early years mainly by Ketola, who had made a small fortune by introducing the ESPRIT clothing brand onto the finnish market.

Ductor today tells about its beginnings (source: Ductor material 2019, p.20), that Latvala and Ketola “analyzed” the problems of the world’s food production and wanted to find biological methods to ensure the planet would cope with population growth. Ketola than organized a “challenge” to scientists at the University of Helsinki, prompting them to find a method which employs microorganisms to produce ammonia – while removing nitrogen from agricultural waste. 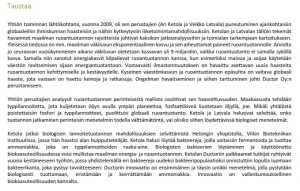 I cannot really imagine a situation, where an outsider – especially a textile salesman fulfilling a vision of a farmer-prophet – contacts a leading university’s scientists, “hey we need some fitting science for this idea we had”. Accordingly, the first patents filed for Ductor list only Latvala and Ketola as “inventors”. Only later applications then have names of actual researchers, too.

The prophet’s idea, without a working process, however, was enough to ensure excessive funding in 2012 by TEKES (now part of BusinessFinland) and, as noted before, by Ahopelto’s LifeLine Ventures. This was probably made possible by the first patent application for the “Ductor technology”, filed by Latvala and Ketola in June 2012.

Ductor was awarded instantly a staggering 1,145 million Euro by TEKES, and received an undisclosed sum from LifeLine Ventures. During the following years, public funding granted would rise to a total of 3,7 Million.

1,4 million were granted in 2014 and 2016, when Ahopelto was on the board of TEKES. Here’s the same problematic pattern we’ve seen before with Valkee and other companies.

Despite their involvement with Ductor, its founders made appearances as prophet and apostle – that’s my interpretation of Ketola’s statements. Veikko Latvala was repeatedly cited in the yellow press for his prophecies, in which he predicted, for instance, the end of Finland’s governing coalition in 2014, and the end of the European Union for 2017.

To be fair, he’s widely regarded as a crackpot, although some still adhere to Latvala’s teachings: There is a whole website ,of a disciple[*] which published the final message on May 31 2020. It commented on the Coronavirus pandemic and said “you will hear from me again”.

Ductor’s main business in terms of generating cash flow have been ever repeated investment rounds. Until June 2019, it’s been over 21 million through direct issuing of shares, crowdfunding, convertible bonds, and other instruments.

Several rounds were organized by kansalaisrahoitus.fi (now turned into Springvest). The last offerings I’m aware of have been convertible bonds, partially through a finnish variant of “crowdfunding” in February 2019 ((planned 2,25 million Euro) and June 2019 (3,6 million).

All investor prospectus material issued for the public rounds reiterates these points:

The latter will be X-rayed in my second post. The billion euro potential is something that many startups include in their investor attraction marketing. The exorbitant revenue predictions for the next fiscal year are a Ductor specialty, given that Ductor has made no revenue at all to date.

As an example, here is Ductor’s forecast as of December 2017 from the 2017 prospectus. Projected revenue in orange, the real result until 2019 is marked in dark blue. 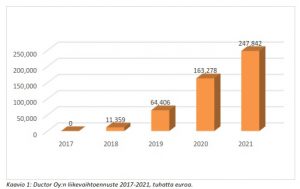 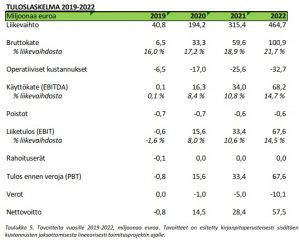 The published balance for 2019 showed €726.000 instead – another 40 million evaporated in half a year. A closer look even reveals, that of this meager result only €17.700 were from sales to other entities than their own group.

To repeat the joke from above: Actual revenue is marked in neon pink. 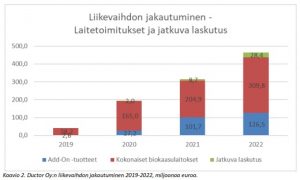 In my understanding, forecasts for the ongoing fiscal year should be somewhat more reliable. Here, investors are recruited with a promise for the upcoming months. This is clearly something else as the extraordinary prognoses for the years to come.

While this may still be somehow in a grey zone, Ductor has also lied directly in more than one prospectus. It’s about the formula which is in all material: In the last 5 years, none of the board members or other leading management

Timo Ahopelto was chairman of at least one company that filed for bankruptcy in 2018. Optomeditech Oy folded in November of that year, with Ahopelto being chairman since 2013, according to the finnish trade register (no. 2018/531107).

I did not check systematically if there are more cases, since the worst (like uBiome) are not on LifeLine Ventures investments page. Such false information can lead to legal action and liability claims.

Ductor had hinted at a possible IPO in 2020, but this did not go further. It would have led to more scrutiny, which inevitably had uncovered such weak points. Instead, Ketola/Mokko has told that a “partial exit” is planned for this year. Hard luck for the new owner.

Finnish companies are allowed to include all kind of acronyms into their name, also such that resemble those of foreign business entities. A firm could those be called a PLC, Ltd, LLC, Inc., GmbH, AG, or whatever, without being incorporated in the respective countries as such. This is helpful, when a company needs to assume or deny identity to conceal creative accounting or unclear transactions.

Ductor has pulled such a trick by registering in Finland concurrently as “Ductor AG”, like the german and swiss Aktiengesellschaft. According to the swiss trade register (SHAB), it founded a company with the same name in Zug am See in 2018. Since then, it’s called a “swiss-finnish company”. In Ductor’s balances since then, there are assets of several million Euro allocated to Ductor AG and the german subsidiary Ductor GmbH, and other such companies in the rest of the world.

The AG has not filed a balance yet, but the GmbH has done it up to 2018. The german branch has had a debt of 1,4 million Euro, of which 437.000 were not covered by other assets. In other words, Ductor’s balance is in fact not “balanced” as required, when we assume that the GmbH’s debt is to Ductor in Finland, as the finnish papers suggest.

It’s not clear what else is behind this construct, and it’s nearly impossible to get a complete picture from outside of the company. An auditor would need access to internal documents from all continents, which seems unrealistic.

With all that money, it may be possible to make progress and even develop revolutionary methods and products as envisioned by Latvala and Ketola ten years ago. The real outcome of this mayhem, however, will be the subject of my second Ductor post.

In my opinion, one thing can be taken for granted already: Even if Ductor would make profit in a distant future, the finnish tax payer and the crowdfunder-investors won’t get their share. Ductor is prepared.

[*correction 8.8.2020: the website in question is influenced by his teachings, but the maintaining person says the prophecies are her own; Latvala made her see these]