This blog will now also take on quackery and fraud in Finland’s academic system.

Photonics Finland and Kuopio Innovation held a “Photonics for Healthcare” event on 14 Sep 2016, at the Spa Hotel Kunnonpaikka near Kuopio. The University of Eastern Finland (UEF) is a member of Photonics Finland, and their Institute of Photonics provided support and speakers for the event.

Here is, what russian researchers from the UEF had to tell about their “innovative treatment for tuberculosis”.

The researchers claimed to be affilatiated with the University of Eastern Finland (Kuopio), the company HyperMemo OY (Joensuu, Finland) and the ITMO University (St. Petersburg, Russia). Vanyukov completed his thesis at the UEF in 2015, and Kiyko is also announced as an UEF person. 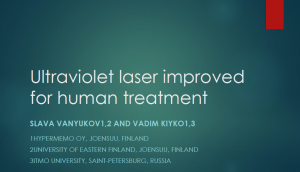 The first tests to treat Tuberculosis with laser beams were done in the Soviet Union, and then Russia, in the early 1990s.

Like the chemist-turned quack guru Linus Pauling, the late russian nobelist A.M. Prokhorov aimed to become an alternative healer. The highly decorated founder of laser theory began to stick lasers into severely ill cancer and tuberculosis patients, with a “see what happens” approach. He was one of the founders of the “lasers for everything” movement.

The method spread to India, and was subsequently used in thousands of “volunteers” in Russia and, mainly, rural India. Although many patients could barely read, even children were exposed to the experimental method.

The idea is to kill the TB bacteria at the spot. The laser light is given by an optic fiber inserted into the TB cavity, puncturing the skin, pleura, and other structures in its way.
Actual photo from India: 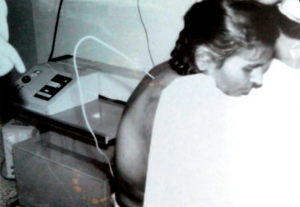 Typically, such a presentation would cite scientific studies which support the treatment.
– This is what the russian UEF researchers present. 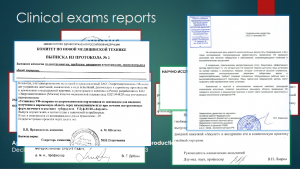 Untranslated, russian technical papers with “official stamps”. And even this is a fake: the left paper is from the long-void registration of an obsolete device. The other is a letter of recommendation with a stamp from the Blagovestshensk, far-east science center, physiology and pathology, siberian branch of the russian academy of medical sciences.

After 25 years of research, this is all they have to show. “Hey Vasya, we need some nice-looking papers for the presentation in Finland. They can’t read it anyway!”

Actually, the method has been tested in India by doctors who visited the russian centers in the early 1990s. There have been a number of trials, which do not meet basic ethical and quality standards. A 2006 Cochrane review found only one poorly reported study, whose author could not be located anymore. It concluded:

The use of low level laser therapy for treating tuberculosis is still not supported by reliable evidence. Researchers need to focus on conducting well-designed randomized controlled trials to justify the continued participation of volunteers for studies of this experimental intervention.

The recruitment into these low-standard studies alone was deemed to be unethical already 10 years ago. Nevertheless, the questionable trials went on, without any demonstration of benefit or harm. The newest was published in 2015. One earlier trial, published in 2010, used such a simplified treatment device (actual photo): 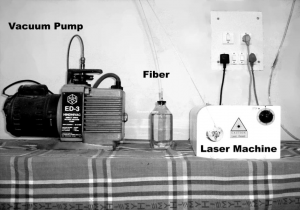 The russian devices are more sophisticated, but use the same technique. 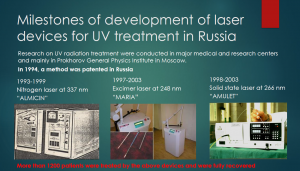 The advantages of the russian device (from the presentation): 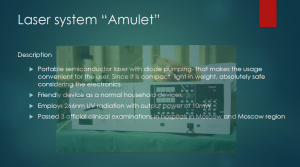 The russian device has no CE mark or other registration in the EU for medical use. We’re told, that the procedure is survivable:

1200 patients were treated, all recovered!

It is absolutely incredible, that such a “treatment” is advertised at a public, and pubicly funded event. Hopefully, the UEF did not use own ressources for this quackery. Maybe it’s “only” misuse of the UEF brand – like in the case of Valkee Ltd, which misused the Oulu University brand. 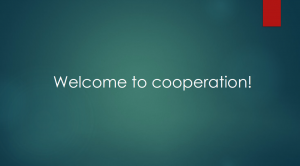 The poor people in India may not understand what happens to them, but doctors and university officials in Finland should recognize a quack as such.